I participated in the Fedora Activity Day at the RH office in Pune yesterday. There was a decent turnout, 20+ people, and it was fun to test the in-progress version of the upcoming F21 release along with other folks.

Siddhesh came up with the idea of rebooting Fedora-related activities in Pune, and a few of us showed interest in such an activity. We quickly agreed on what to focus on for the first such activity: test the upcoming release. This would give us an opportunity to improve the experience with F21, and also be a low-barrier-to-entry activity for first-time contributors: we have had some FADs in the past, but the people who turn up tend to be usually familiar with Fedora or particular aspects of the OS; so focussing on using the OS, and filing bugs along the way, was thought to be a great way to initiate newcomers without necessarily diving deep into technical details. 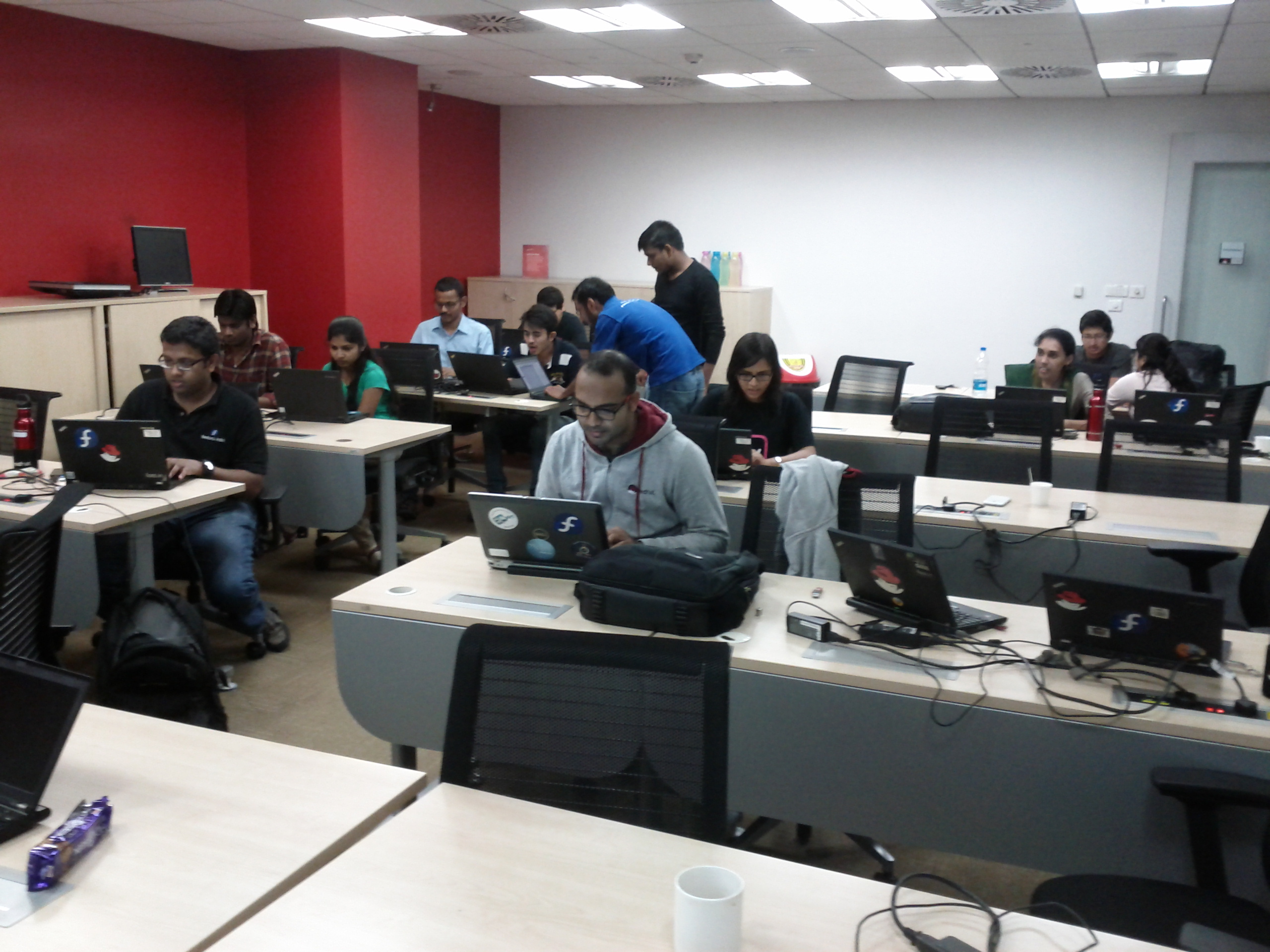 In that respect, I'd like to think the FAD was a success. We had people testing the installer, the GNOME and KDE desktops within VMs and via live images on laptops, and also a few specific items like VM snapshots and DNSSEC.

Before the FAD, I downloaded and tested in a VM two nightly images - the default workstation image with the GNOME desktop, and the KDE spin. The Aug 20 nightly for both the images worked fine, so we declared them as gold images for the FAD. Most people already had downloaded them before they came for the FAD, and this helped us start with the FAD as soon as our laptops were booted.

We started off at about 9 AM, and I was around till a bit after 4 PM. I tested the default GNOME live image on an X200 laptop, and also inside a VM. I found a couple of suspend-to-ram related issues in GNOME and in the kernel. Quite a few people tested the installer, and I liked how we kept conversing about the issues people were seeing, others attempting to replicate the issues, and once there were 2 or 3 +1s for a particular kind of an issue, we knew it was a fairly reproducible bug. 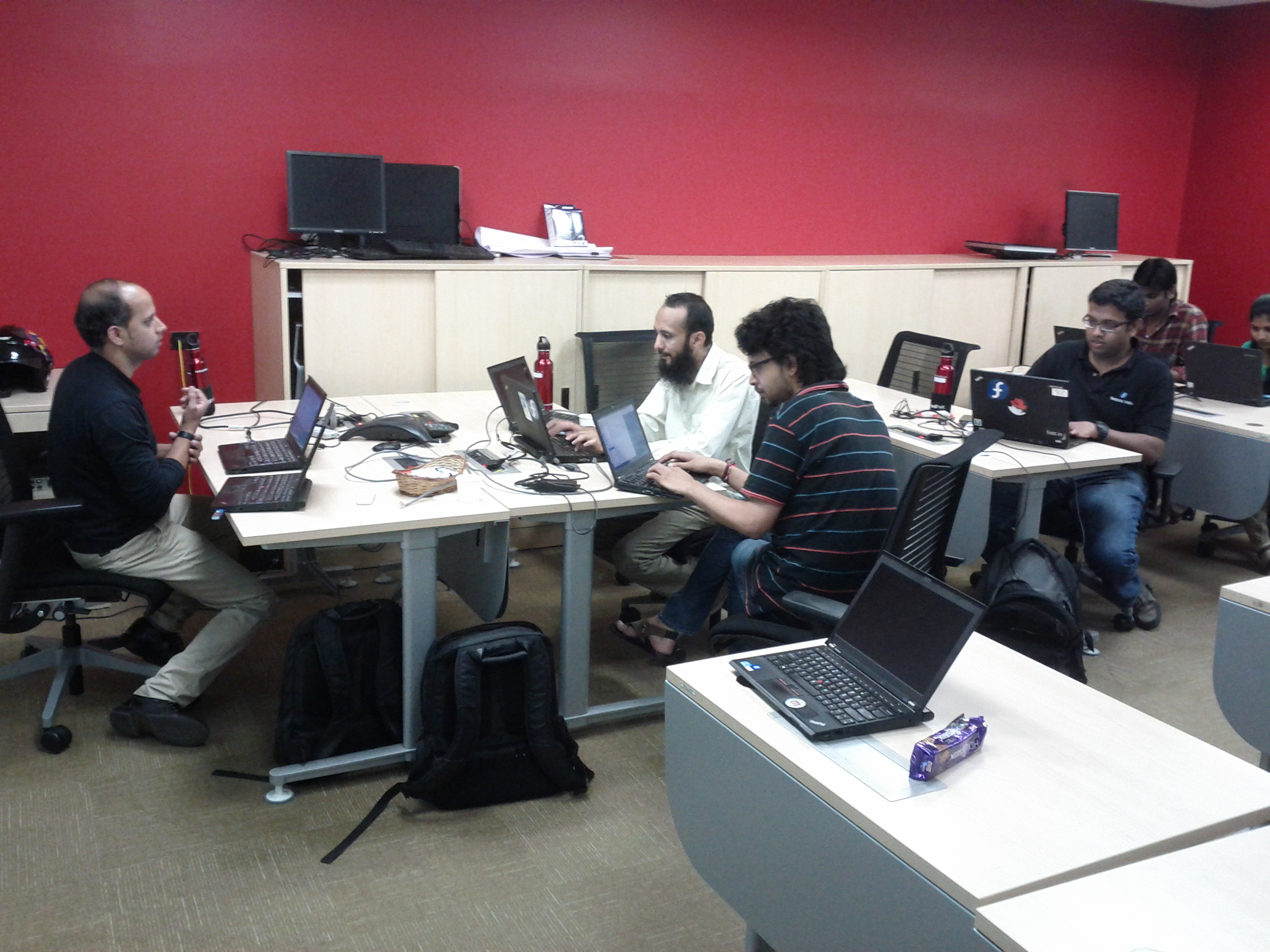 Some people ran through some Fedora Test Day test cases, some went through ON_QA bugs to provide karma on bodhi.

PJP took the lead on educating us on DNSSEC and walking us through setting it up as well as testing whether everything works fine.

Kashyap then spoke a bit about how VM snapshots are a great tool for testing destructive things, and showed the couple of different snapshot techniques, and how to set them up and use them using libvirt. Quite a few people agreed this was really cool, and I expect them to start using snapshots in their regular $DAYJOB activities.

We kept recording our progress, bugs found, etc., on an etherpad. The #fedora-india channel helped us exchange links and was helpful for general chit-chat. (Edit: The contents of the etherpad as on the day of the FAD are archived here)

Through the day, quite a few categories and components were tested, as noted in the etherpad.

The FAD wiki page's status area is still being populated, but the etherpad has links to bugs found and filed.

The initial mails about hosting a FAD to the fedora-india list showed there was interest in a lot of topics to cover for FADs, so I'm sure we'll have more such FADs organized with more topics in the future.

Since this was mostly a volunteer-driven event, everything was quite informal. Red Hat sponsored the venue and snacks, and everything else was handled by us on the fly, like lunch being ordered when people started feeling hungry -- according to preferences by show-of-hands. Since this FAD was cobbled together in very quick time, we didn't have enough time to engage with the Fedora contacts for budget for swag or food; hopefully we will be able to get that sorted out soon -- especially since we have interest in the FADs and also topics lined up to work on.