A few weeks back, a strange bird call started waking me up.  Though red-whiskered bulbuls are supposed to be pretty common, I'd not heard them or seen one up close. 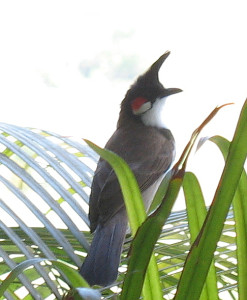 There were two of them making rounds throughout the day, and they used to visit one plant in my terrace-garden frequently.  I took that as a sign that they're building a nest, and ensured they don't get disturbed when the visited.  I tried taking a few pictures, but couldn't manage good ones: these birds are very shy, and any they're very alert to any movement or human presence.  There's a better photo at wikipedia.

Exactly one week after they started arriving, they had built a nest and they didn't make as much noise as earlier.  That made me curious.  I checked out their nest, and was quite delighted to see an egg: 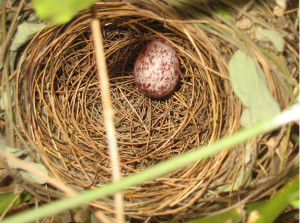 The next day I woke up to a lot of mayhem, lots of bird noises near the plant.  I didn't feel like disturbing anything there.  When the commotion died down, I went to check, and saw the egg was missing.  That was a sad end to the week-long activity around the nest.  I initially suspected pigeons, permanent residents in the terrace, to have caused the damage.  However, later in the day, a big crow came by near the same plant (crows have never come inside the terrace earlier).  Wonder what this all means, and where the egg vanished.